While writing and compiling To-Do List I took an online survey to find out more about our common quirks, compulsions and habits as listmakers. Six hundred people participated, and full results are in the book, but I thought I would share a few of these stats with you now along with some of my other observations based on collecting lists.

How do you compare?

1. Many people hang on to their lists for years, if not decades. A list is like a diary. It captures a moment in time. (Two of the lists in the book more more than fifty years old.) I was amazed when these people trusted me with these treasured keepsakes and sent them to me in the mail.

2. Most people (83%) still prefer the tactile experience of writing their lists with pen and paper. The visceral pleasure of crossing things off cannot be underestimated. And people often feel more accountable when a list is in their own handwriting.

3. 29% of people have written at least part of their lists in code. The most common codes were from women who don’t want the boss or co-workers to walk by and see they were buying feminine hygiene products. “Tampons,” “birth control” or “maxi pads” equal T, BC, and MP. I could not believe when these answers kept coming up again and again in survey answers! Uncanny!

4. 50% admitted to writing down tasks they have already done, then triumphantly crossing them off. That way, they have a more complete picture of everything they’ve done, plus another opportunity to cross something off. It’s sort of insane how much we love crossing things off, huh?

5. Ideal mate lists are more popular than ever. 51% have made a list describing their ideal mate. But only 38% think these lists are useful in finding or evaluating a partner. How good is good enough? Many of the people who contributed dream mate lists said 70% was the threshold. If someone fulfilled fewer than 70% of the desired traits, they would say, “Let’s just be friends.”

8. 26% of listmakers at one point have written a "to-don't" list. According to the survey, most concern men not to date or sleep with.

To-Do List blog celebrates the world of the overlooked and mundane, letting our lists serve as unique windows into who we are. Because nothing is more revealing than someone's to-do list.

Send a scan or photo of your list to todolistblog AT gmail.com 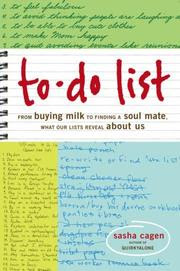 See what other people are "to-doing" in this collection of 100 handwritten lists and the stories behind them. Check it out: Amazon